Towards a Real Darron Gibson

In debates about the merits of players, one often stumbles across a broad streak of essentialism in the opinions of fans and, especially, ex-professionals that can be summarised in this way: ‘[name of supposedly sub-standard footballer] is not a [prestigious football team] player’.

Thus, a proposed call up for someone like Grant Holt will be shot down by the bags of sawdust sitting on the Match of the Day couch under the assumption that Holt is simply ‘not an England player’. Implicit in this is the belief in an elect of players whose ‘world class’ status inarguably shines through. In England’s case, these ‘world-class’ players include James Milner, Glen Johnson and Stewart Downing.

In Ireland’s case the situation is reversed: virtually none of the starting eleven is considered good enough to play, whereas fans and ex-professionals frequently fixate on such unlikely utopian figures as Andy Reid and Stephen Ireland. Trapattoni’s reluctance to be swayed by public opinion has allowed the mythology of both these players to grow during his tenure; rarely has a draw or defeat come and gone without the absence of one or other of these players being mentioned. Again: what might have been. Instead, Reid and Ireland exiled like Trotsky awaiting a drawn-out ice-pick death: in the afterlife, perhaps, lower-league pundits for Sky Sports News – a circle of hell known informally as ‘the Beagrie’.

Far from the gulag, the inclusion of James McClean in the squad for Euro 2012 has been a sop to those who bemoaned the lack of ‘genuine creativity’ in the Irish team. Aside from McClean’s lively performance in the recent friendly against Bosnia and Herzegovina in Landsdowne Road, there are other strengths to the current Irish team which give cause for hope, not least of which is greater consistency from the hitherto talented-but-flaky Aiden McGeady, and the improved performances of Darron Gibson. 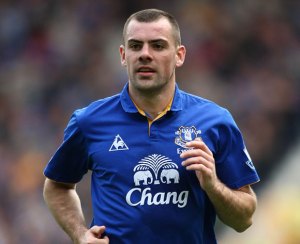 Gibson is a prime example of a ‘not a’ player. At Manchester United, especially during his last months there, he was thought of as ‘not a United player’ – too keen to get up the pitch, too error-prone and fond of woeful shots from thirty yards that only occasionally hit the target in a spectacular fashion – and suffered the twin ignominies of being replaced by Paul Scholes and being transferred to a struggling and threadbare Everton side for around half a millon pounds.

Jokes immediately circulated about Gibson being ‘the new Phil Neville’, a similarly limited player who made the same move from Old Trafford to Merseyside several years earlier. Perhaps coincidentally, Everton’s fortunes changed when Gibson arrived. He scored the winner at home against eventual champions Manchester City, and Everton didn’t lose a game he played in. Others will point towards David Moyes’s signing of Nikica Jelavic as the pivotal one for Everton, but on viewing Everton’s 4-4 draw with Manchester United one can see that the key battles were won in midfield by Gibson and Neville, with Gibson in particular hugely effective from kick off to final whistle. Their work in midfield allowed Marouane Fellaini to roam forward, with spectacular results. Scholes, by contrast, was ineffectual.

I had heard reports from Everton fans about Gibson ‘pinging the ball around’, but didn’t believe it until I actually saw it: the Derry-born player showed aggression in breaking down opposition play and precision in distribution that made him Everton’s most accurate passer during the 2011/12 season. (An analysis of his passing, compiled in February 2012, is here.)

Does Gibson offer a solution to one of the Republic of Ireland’s most glaring problems? The inability of the central midfielders, typically Glenn Whelan and Keith Andrews, to profitably link defence with the forwards has led to both an increasing reliance on long-balls out of defence and an emphasis on wing play as the team’s primary mode of attack. This has made Trapattoni’s Ireland extremely predictable, and is in constant danger of turning almost every game – including those against low-ranking opposition – into a drawn-out, nail-chewing war of attrition.

Gibson played the whole 90 minutes against Bosnia, and, in spite of a couple of shaky moments, looked in control and capable – even fizzing passes across the pristine Aviva turf. Away against Hungary, he came on late and, along with much of the Irish team, looked uncomfortable and error-prone. Which is the real Darron Gibson? Based on his performances in the latter half of this season, I’d argue the former.

Recently, Trapattoni justified the addition of the defensively-minded and unspectacular Paul Green to the squad, calling him “a particular type of player.” Addressing the gathered media, Trapattoni, combining accusation with mime, said: “I know you [the media] don’t like him because you only like the players who [gestures playing the violin to suggest more creative types] but in every team there is an example of this type: Italy have Gattuso. Teams need players with mentality, not just play-makers. Green can do this – stop others playing – and that is important for us.”

While undoubtedly true, Trapattoni’s statement has the unfortunate effect of ratifying the somewhat false opposition between ‘creative’ (Stephen Ireland, Andy Reid, et al) and ‘uncreative’ players (pretty much everyone else). No doubt this opposition is a ruse that allows Trapattoni to reject less effective, if more spectacular, players in favour of those who better fit a squad in which a work ethic, and a willingness to adhere to the manager’s tactics, is prized above all. Nevertheless, a strong midfield is not merely based on neutralising the opposition – something Gibson’s experience with Everton showed in the latter half of the season. It remains to be seen whether that experience can be harnessed by Ireland in the coming weeks.

4 thoughts on “Towards a Real Darron Gibson”